Maybe it’s true that having $1m+ isn’t as impressive as it used to be these days. But it’s still a measure that we continue to use as a marker of financial “arriving”.

What’s further interesting is that even in the midst of the “Great Recession” and its ongoing recovery, the numbers of people who are achieving that mark is increasing. (See here, for example: https://www.telegraph.co.uk/finance/personalfinance/expat-money/10158420/A-record-breaking-number-of-millionaires-in-the-world.html )

But I’m most interested in the kind of financial (and otherwise) behavior which leads to this status. And, having dealt with clients who have reached this point, I believe I have come to a few objective truths about how this stuff works.

With certain exceptions, it’s not what Hollywood tells you about it. In fact, based on my research, here are 12 portraits of what today’s millionaire looks more like … 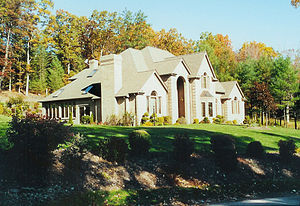 A luxury home in a small town (Photo credit: Wikipedia)

1. He always spends less than he earns. In fact his mantra is, over the long run, you’re better off if you strive to be anonymously rich rather than deceptively poor.

2. He knows that patience is truth. The odds are you won’t become a millionaire overnight.  If you’re like him, your wealth will be accumulated gradually by diligently saving your money over multiple decades.

4. He realized early on that money does not buy happiness.  If you’re looking for financial joy, you need to focus on attaining financial freedom.

5. He understands that money is like a toddler; it is incapable of managing itself.  After all, you can’t expect your money to grow and mature as it should without some form of credible money management.

6. He’s a big believer in paying yourself first. It’s an essential tenet of personal finance and a great way to build your savings and instill financial discipline.

7. He also knows that the few millionaires that reached that milestone without a plan got there only because of dumb luck.  It’s not enough to simply declare that you want to be financially free. This is not a “Secret”.

8. When it came time to set his savings goals, he wasn’t afraid to think big.  Financial success demands that you have a vision that is significantly larger than you can currently deliver upon.

9. He realizes that stuff happens, and that’s why you’re a fool if you don’t insure yourself against risk. Remember that the potential for bankruptcy is always just around the corner and can be triggered from multiple sources: the death of the family’s key breadwinner, divorce, or disability that leads to a loss of work.

10. He understands that time is an ally of the young. He was fortunate (and smart) enough to begin saving in his twenties so he could take maximum advantage of the power of compounding interest on his nest egg.

11. He’s not impressed that you drive an over-priced luxury car and live in a McMansion that’s two sizes too big for your family of four. Little about external “signals” of wealth actually matter to him.

So that’s it.  Now you know what those millionaires out there won’t tell you.

It’s up to you what you do with it.

With gratitude for your trust,

Saving more taxes will give you more money to be saving so, how about getting some help on saving more taxes. Get the free report that will help you to save taxes. Click on the tap on the top right and you will get it immediately.  Take charge of your taxes now for 2013! – See more at: https://savemoretaxes.com/general/planning-for-financial-independence/#sthash.1s33hxVg.dpuf

“Howard Kaufman has been my accountant for the past 20 years. I met Howard at a trade organization. Through this association, I came to know and trust Howard. He has assisted me with my individual and business accounting; everything from payroll, accounts payable, financial statements and tax returns to long range planning. The trait I admire most about Howard is his honesty. I feel that he truly watches out for the well-being of his clients.Howard is constantly giving me suggestions that save m… END_OF_DOCUMENT_TOKEN_TO_BE_REPLACED

“Three years ago Howard Kaufman became my small accountant. This financial relationship has been extremely advantageous to me. Howard is not only knowledgeable, he is easy to talk to, and is readily available to help me with my many questions and concerns. I really appreciate what Howard has been able to offer me, and I recommend him to others who are looking for financial help.”

“Howard Kaufman has been my accountant for the past 20 years. I met Howard at a trade organization. Through this association, I came to know and trust Howard. He has assisted me with my individual and business accounting; everything from payroll, accounts payable, financial statements and tax returns to long range planning. The trait I admire most about Howard is his honesty. I feel that he truly watches out for the well-being of his clients.

Howard is constantly giving me suggestions that save … END_OF_DOCUMENT_TOKEN_TO_BE_REPLACED

“Just a short note to say thank you for your support and guidance with our accounting and tax matters. It is a pleasure working with you and your staff. I am looking forward to continued successes in our business relationship.”

Dear Howard,”For the last twenty-seven years, it has been my pleasure working with you as I could always count on you to constantly be looking for ways to minimize my taxes. You have always been available to discuss investment ideas prior to my making any moves, and, so many times, you have saved me thousands of tax dollars. Your help has been invaluable to both me and my company in the past and the present… I am looking forward to another 27 years of working with you.”

“I find you and your staff very knowledgeable, very flexible and very good at explaining all the salient details that I need to be able to make good solid decisions when it comes to my tax and financial situations.  You are always upbeat and a pleasure to talk and work with.  I would recommend you and your firm to anyone.”

“From 0-20 million and thru the sale my company, Howard was there by my side all the way. Thanks Howard!

“Your solid tax and always reliable financial guidance has been of incredible help to me. It is no stretch to say you’ve lifted the burden of preparing my taxes and guiding my investment strategy as I prepare for the future off my shoulders. I sleep soundly at night knowing that I am able to depend on your always honest and reliable advice and counsel.”

“Throughout the many years Howard has processed our tax returns, the results have been: Prompt, Precise and Paramount.”

“You have processed my returns for sometime now.  I have always been pleased with the quick response to any of my questions.   Both you and your staff have been both professional and polite.  Thank you again, Sibyl.

WAIT! Get your FREE report...

Yes! Send me the report
x

Enter your first name and email below and we'll send you the report instantly.

to my free report.

How to Instantly DOUBLE Your Deductions & SLASH Your Expenses to the bone.